This blog is a collection of spanking stories. So let's start with one that has no spanking in it. But spankings lost and spankings missed, that's something else.

I don't regret, but I wonder. Years ago I lived in New York City with my first husband, a charming, handsome, funny, kinky, loving boy, who wanted in the worst way to be an actor and was just the worst actor, bless him. He'd heard of a photographer people were talking about and decided he needed new head shots. Unemployed actors spent a lot of time getting new head shots and going to classes run by more established unemployed actors.

Head shots were the 8x10 close up portrait prints they stapled to their resumes and handed out to anyone who'd take one. It's all done online now I imagine.

This photographer lived in our neighborhood so we went to see him. I would guess he was late 50s, early 60s, at twenty-three people his age just looked "older" to me. He was very fit, small of stature, but compact and strong looking, with thick white hair. Quite the dapper bohemian in his beautiful little garden apartment. He had French doors that opened onto a tiny back garden. More treasured than gold in that city. That was magic.

He shot right there in his living room. I sat to the side watching and he made a fuss over me, but politely. He kept taking pictures of me sitting there. We had a good time. His name was Roy.

After my husband and I had split and he had moved away, he called and wanted me to get in touch with Roy and get a copy of his contact sheet, the page of thumbnails they make up so you can choose which shots you want printed. Apparently he had rallied and was planning to storm the renowned Boise suburbs acting scene. I called and Roy said to come right around.

In his charming apartment he gave me some kind of wonderful tea and talked in his witty, articulate way. He stood beside the work table looking through the contact sheets. I went to him and knelt in front of him and pulled his clothes down and took him in my mouth. I felt no hesitation in doing that, he acted like it was the most natural thing in the world.

His balls, his cock, his semen -- his scent and taste were light and exotic like the faintest spice in the tea. I took my time. I enjoyed it very much. He climaxed in my mouth in a fine stream of coconut milk.

A couple of days later he called early in the morning and made quite the job of an obscene phone call. I laughed and told him it wasn't an obscene call if I knew who he was. He did it several more times but I got irritated that he would only call in the morning. I worked at night and would have just got to sleep and he'd wake me. So I turned the phone off when I got home.

Other things happened and I never saw him again. Ignorant, wasteful child. Years later I realized that man was probably a Great Dom. The nonchalant grace with which he accepted that fellate, his palm resting so lightly on the top of my head. Not pushing, not guiding, just calmly owning me. The rough sense of danger in the phone calls, the sly menace. He was inviting me. He knew me. I didn't.

I didn't know my nature until a long time later. I had always accepted I had secrets I would never tell anyone, even my first husband who was so open to anything. You just didn't tell. It never occurred to me that something so big a part of me needed to be expressed in my life to make me whole.

A few years after I saw him that last time, I saw three pictures of me from that day of my husband's shoot, blown up big like mounted posters hanging in a laundromat with Roy's business card fastened to the lower corner. Photographers would do that to advertise their work. Unemployed actors hung out in laudromats a lot. Later I heard that he'd died.

What would my life have been like if I'd been mentored at that age to a man like that? If I'd been awakened that much earlier and with that kind of skill. 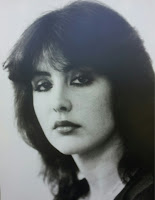 Dedicated to SC of Flipping Spankcakes and MM of Secret Spanko, in appreciation of their acceptance, encouragement, assistance, and threats. And to Pink of The Pink Report, my first love.
Posted by Emen at 1:40 PM